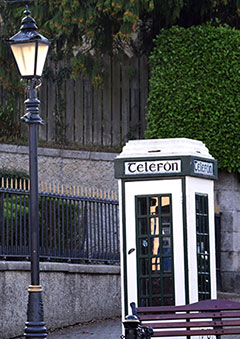 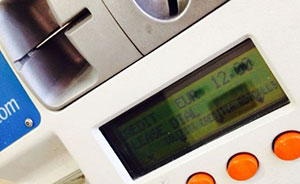 Another interesting feature of this implementation is that Eircom recycled many older Callcards by printing over older cards with the new design. Even though the cards were reprinted it is generally quite easy to identify which Callcard was overprinted. For more information about overprinted Simply Talk cards click here.

The Last issue Callcard is believed to have been produced sometime around the years 2005 and 2006. Some shops in Dublin City Centre even continued to sell Callcards up until very recently.

This callcard contains a very bland design. This card is part of the "Simply Talk" definitive card series. Interestingly only a €15 Callcard was produced using this design, €4 or €7 versions are not known to exist.

For Callcard collectors, a Callcard reader device is required to check if a Callcard has full units or has been partially used. Particularly for Callcards which did not come in a wrapper.

Pictured: An Eircom branded Callcard reader that is capable of reading a Callcards remaining unit count. As can be seen from the above photo, the Montage Callcard is mint with all 5 Units still on the card. These readers were sold to the general public via the Callcard collectors Club. These particular readers can read Irish Callcard chips only (they will not work for international phonecards).

When was the last time you used a Callcard or a phonebox? Feel free to comment below!

Ahh right, I was wondering do the chip & pin ones for sale on Ebay do the trick. Thats no problem thanks

Reply - Ahh right, I was wondering do the c... (Jump to comment)

I would think any ISO chip USB smartcard reader should be able to dump most Callcard chips. You would then need a way to decode the raw chip data (and also figure a way to get the raw data to begin with). It should be possible to create a simple program if you are a developer to get the chips raw data into a readable form. There is a document in the links section of this site on the subject which also includes how to identify Irish chips: http://phrack.org/issues/48/10.html It's not something I ever looked into personally. I have an old Eircom chip reader which works fine. An interesting project for someone from a software developer/engineering background though..

Reply - I would think any ISO chip USB smar... (Jump to comment)

I've 2 options, I have a mate who is a computer programmer so might try that. Also know a man who has worked with Telecom Eireann, then Eircom so will bend his ear on card readers.

Also Nick, wondering I you could send me a picture of what a card reader looks like.

Reply - Also Nick, wondering I you could se... (Jump to comment)

Hi Liam, I have updated the blog post above to show a photo of a Callcard Reader. This is the Eircom branded one the collector's club sold back in the late '90s/early '00s.

Reply - Hi Liam, I have updated the blog po... (Jump to comment)

Wow, never seen one before...I cant believe its something so simple as being on a keyring

No worries Liam. They come up on adverts occasionally. Hopefully you'll manage to acquire one soon!

Was wondering if you can buy a card reader at all?  Isn't a specific type that can check credit etc?

Reply - Was wondering if you can buy a card... (Jump to comment)

You would need a device capable of decoding the Callcards chip information. A bank card reader or SIM Card reader will not do this. It is not a straightforward task by the way, I might have been a bit unclear in my last reply making this sound like it should be an easy task for any programmer or engineer to do. It's not something I've ever looked in to doing, and while I have programming experience I don't have any engineering experience. I assume any card reader will be capable of dumping a callcards information stored on the chip, but I cannot say that for any certainty because it is not something I've looked in to.. There is also a large variety of different chipsets that were used over the years by Telecom eireann, it is also possible that for some of these chips a generic ISO Card reader may not be able to read them depending on contact position.

Reply - Was wondering if you can buy a card... (Jump to comment)

They are quite scarce Liam. I have seen the odd one show up on adverts.ie over the years though!