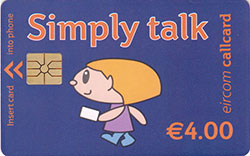 To coincide with these changes Eircom released a new definitive Callcard range known as the "Simply Talk" range. This range offered value denominations of £3, £5, £10 initially. Later updated values of €4, €7 and €15 were introduced due to the Euro currency take over in 2002. These Callcard's featured a basic dark blue design, with a newly created cartoon character mascot to provide a visually appealing look to the card.

While the Simply Talk range would arguably be the blandest and most boring of Callcards ever produced, an interesting feature of these Callcards is that many were overprinted. Eircom had leftover batches of unsold Callcards with various denominations and card designs, and for environmental purposes re-printed them with the Simply Talk design using thermal printing techniques. In fact, even earlier Simply Talk Callcards were overprinted just to add to the confusion!

To learn how to recognize an overprint please refer to the illustration below. It should be noted not all Simply Talk Callcards were overprinted. 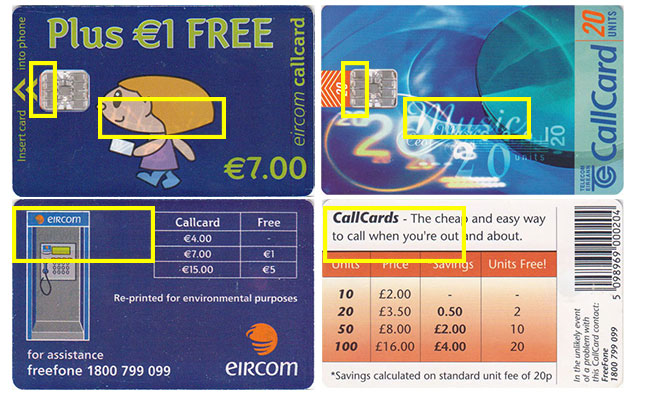 To identify an overprint you will need to hold the card up to a light source and see if you can recognize the Callcard from patterns under the thermal ink layer. Getting a positive ID of an overprint can be tricky, especially depending on the quantity of ink used when overprinting. Refer to the reference image above for more information.

So just what Callcards did Eircom Overprint?

An interesting question many collectors ask is what Callcards did Eircom use to overprint? It is quite likely a substantial number of Callcards featuring different designs were overprinted, may of which remain unknown.

A table of known overprinted cards, along with the Simply Talk denominations are below.

Am I missing any? Do feel free to contact me if you have any knowledge of overprints not listed in the table above.

The last ever Eircom Callcard issued introduced a new and extremely bland design. It features a telephone with orange colour scheme, a similar design idea to the 1990 EC Presidency card. This was the last Callcard known to have been produced by Eircom, and current rumours indicate it was released in or around 2004 or 2005. It belonged to the Simply Talk definitive range.

Want to check out the full Simply Talk range of Callcards? Click here to view them in the gallery!