20 years on from the last Callcard Collectors Fair

It was 20 years ago this year, on May 26th 2001 Eircom was to host the very last Callcard Collectors Fair. Since the year 1996 Telcom eireann, later Eircom had hosted yearly Callcard fairs in aid of charity. The charity of choice over the 6 years running was the Irish Brain Research Foundation, and briefly the National Council for the Blind (1996 & 1997). The Collectors Fair was hosted at the Jury's Hotel in Ballsbridge initially, later on moving to the Royal Dublin Society (RDS) venue in Dublin.

After payment of the £2 entrance fee (for adults, kids under 12 were only charged £1) entrants had access to dealers stalls where one could buy or swap Callcards. For every Callcard Fair, Telecom eireann then Eircom would have produced a special Limited Edition Callcard (in some cases 2 cards were produced) and the entrance ticket enabled the attendee the ability to purchase just one of these special cards (priced at £10) with the proceeds going to charity.

The format of the Callcard Fairs was mixed, in order to attract both the younger collectors but also to cater for the more serious collectors. The fair was so big in it's heyday that it even attracted international interest (Source Article).  By the mid 1990s certain Callcards were so valuable that Callcards were purchased by some as investment pieces. Dealers setup stalls on the day where one could buy or possibly swap Callcards. Plenty of collections were considerably upgraded on these days!

At it's peak for the 1997 Callcard Fair a queue of more than 600 people formed snaked around Jury's Hotel in Ballsbridge to gain entry to the fair. This was a huge event, and for a lot of kids a great day out and the ability to add to collections. Pictured below, some photos of the 1999 Collector's Fair: 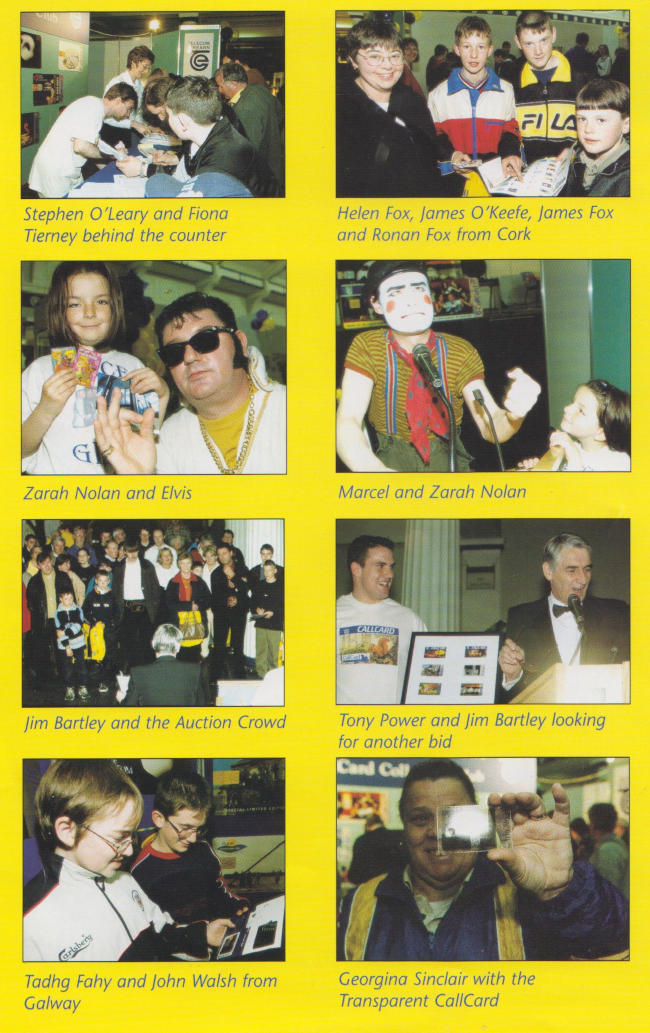 As can be seen from the photos above the fair format was very much a family orientated-fun day out which was expected given the huge interest in Callcard collecting by the younger population.

Each Callcard Collector's Fair had an Auction where tickets could be bought with all proceeds going towards charity. Over the years some very rare cards were auctioned off at the fair, including the two infamous Irish Management Institute (IMI) Callcards. According to a representative from Whyte's auctioneers "At the boom period three years ago, "the two of those cards (IMI Ireland's Europe Callcards) were fetching in excess of £1,000 [for the pair]. I think the record we got was £1,300" (Source Article).

Telecom eireann, later Eircom published a quarterly newsletter which would give details about the upcoming Callcards and also upcoming fairs. These newsletters were available free of charge from the Collector's Club and were either posted out, or could have been collected from the Callcard Collector's Club offices located on Dame Lane, Dublin. By March 1997 the club boasted 15, 500 members!

Pictured are scans of two of these newsletters, the 1999 and 2000 issues respectively (note the band change from Telecom eireann over to Eircom):

The final fair, in 2001 was a much smaller affair. Two Callcards were produced, including one for charity. The 2001 Fair cards can both be viewed here. The Montage 2001 fair card featured the slogan "Collect Eircom Callcards. A hobby for life.". Quite an ironic addition as this year was to be the last Collectors Fair. By the early noughties with mobile phone devices being more accessible, the demand for Callcards plummeted. Over just a few years what was once an iconic object of the local newsagent was now no more. By the end of 2003/2004 Eircom stopped production of Callcards due to lack of demand.

Did you attend any of the Callcard fairs? Any interesting stories or tales worth telling? Drop a comment below!

Unfortunately as a young child in the 90's, I was never brought to any fairs. Pity... would love to have experienced even 1 just to see the buzz.

Thanks for the comment Richie! Glad you enjoyed it. If you can think of any material that would be interesting for the site please drop me a email and I'll look into it.

I only got to two fairs myself ('96 and '99) as a kid, but enjoyed each time! Picked up many needed cards there was some excitement.

Very nice article Nick and good to see you still adding new material to the website.

Unfortunately as a young child in the 90's, I was never brought to any fairs. Pity... would love to have experienced even 1 just to see the buzz.