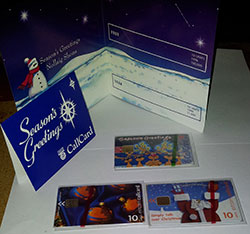 Both Telecom Eireann and Eircom released special Christmas Callcards each year. These Christmas themed Callcards were issued to the general public starting in 1992 and ending in 2000 wishing their customers a Happy Christmas and New Year.

Early on, Telecom Eireann provided a special envelope/cardboard sleeve with the Callcard in an attempt to target the Christmas market. The idea was customers would buy the special Callcard and sleeve/envelope as a Christmas gift for someone. It should be noted not all of the Christmas cards were sold with an envelope or sleeve, and many were sold simply over the counter at outlets nationwide.

Starting in 1996, Telecom Eireann released a private edition Christmas Callcard to go alongside the general release. This move pleased Callcard collectors, and as many were young Christmas time was a time many collectors were able to get rare callcards as presents.

For Christmas 2000 Eircom only produced a private Callcard. This card was issued to Eircom staff and the remainder could only be purchased through the collectors club. It was interesting that Eircom never issued a public card this year, the reason possibly due to Callcard use and also collecting declining.