While many Callcard collectors may have taken little to no interest in collecting prepaid phonecards, there have been many very interesting examples of Irish prepaid cards produced. Prepaid or Remote memory Phonecards were not inserted into a cardphone during use, instead they used a secret PIN Number which would be revealed on the rear of the card in conjunction with either a Freephone or low call number.

The user would dial the number printed on the back of the card and then key in their secret PIN identification number to verify their balance. They could then proceed to make a call on any supported phone, not being limited to cardphones like Callcards were. 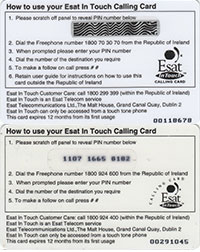 This example shows two ESAT In Touch phonecards, with PIN exposed and hidden.

In the early nineties many telecom companies in Ireland, large or small produced and sold these phonecards, many of whom made special editions to mark particular events, advertise various businesses similar to what Telecom Eireann and Eircom had done with their Callcards.

This blog post is going to cover some examples of interesting pre-paid phonecards, companies which produced them early on and also how remote memory technology is still very much in use today.

Telecom Eireann and Eircom also manufactured prepaid phonecards, which were separate to their Callcard brand. The “Ireland Direct” phonecard produced by Telecom Eireann, was widely used by Irish holiday makers who wanted a way to call Ireland cheap from countries they visited abroad. The benefit of this technology was that it was not confined to a specific system, so all a person needed was a phone and their card to make a call!

Other Irish companies manufactured prepaid phonecards to rival the Callcard brand, however. Offering cheaper calls, better flexibility and also more choice these cards were also fairly popular amongst payphone users. Esat In Touch, Swiftcall, Torc Telecom, Switchcom are among those Irish companies who manufactured many phonecards in the nineties.

A Switchcom phonecard sold by Maxol Petrol Stations. Note Switchcom's use of the term "Callcard"

From convenience stores, to petrol stations, supermarkets to bookshops prepaid phonecards were a very popular item for businesses to sell.

Prepaid phonecards were also used to mark special events, such as the Millennium year 2000 Torc Telecom issued phonecard. Many smaller telecom companies also produced special edition cards for the collectors market, some of which can be still quite valuable today.

This Guinness pint shaped phonecard issued by Swiftcall is an example of interesting prepaid phonecard design.

Some companies even went a step further like Swiftcall did for Guinness. This pint shaped card had all the instructions and PIN number

printed on the back of the card.

During the early ‘00s with the popularity of the mobile phone increasing, and the public payphone use dropping substantially, many mobile phone providers used similar technology to what these phonecards used. For “Pay As You Go” customers, many of the Irish mobile providers produced cards with a similar PIN printed on the back, which would “top up” the user’s account.

To this day remote memory phonecards are still quite popular, particularly with users who wish to phone international numbers. Many companies specialise in producing prepaid cards for international use, which can offer cheaper call rates than domestic ones. Even the large supermarket chain Tesco have an international phonecard for sale at the time of writing.

Quoting Dave
Hi I have an eagle star call card still in its wrapper and have been told it's rare enough , any idea how much it would be worth ? Thanks in advance . Dave

While it is a rare Callcard, nowadays it is far less valuable than it was back in the nineties. I would value a mint-wrapped Eagle Star in the current climate at €12-€15.

Hi I have an eagle star call card still in its wrapper and have been told it's rare enough , any idea how much it would be worth ? Thanks in advance . Dave