Back in the nineties before the popularization of mobile phones, every village, shopping centre, public spaces typically had one or more public telephones. In fact, public telephones were so popular, there were often queues of people wanting to use them! The first public call box was installed in Dublin in 1925. Move on 63 years, which saw the introduction of Telecom Eireann Callcards in the year 1988, with the first trial commencing in Dublin. Read more about the Callcard trials here!

Throughout the years Telecom Eireann rolled out many different phonebox styles and this article is going to discuss the three most common types of phonebooth you were likely to come across if you were to use a cardphone. Do you have any photos of Irish phoneboxes you would like to share with us? If you do why not send them on? :) . 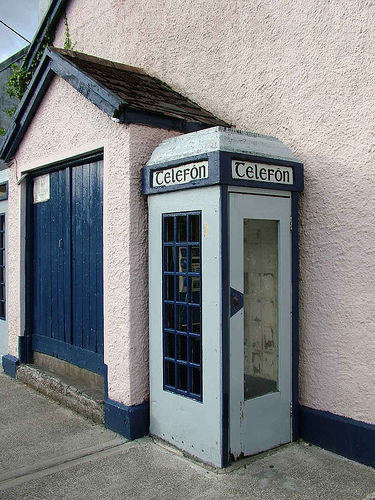 These phone boxes were the older type constructed using concrete and wood. While these boxes were more visually appleasing within the landscape than some of the later ones the maintenance costs required for each box were known to be considerably larger.

As a result not many of these phoneboxes did remain, and many remaining ones were removed with a modern one replacing it.

The phonebox pictured here has the classic Telefón branding on top, suggesting that very few changes were made to this particular box over the years. A Eircom dual Card/Coin phone can be seen installed through the hatched window. 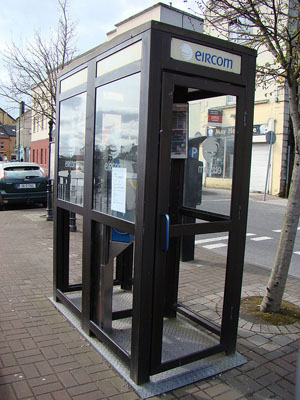 These phoneboxes (pictured right) were intruduced in the mid '80s to early '90s, to replace the older phoneboxes as shown above or to construct newer booths for their customers. These phoneboxes regularly came in side by side configurations, with two phones on opposite sites to each other.

This configuration was later used to separate the coin phones and cardphones, when Telecom Eireann introduced the chipped Callcards in the 1990s. Initially Callcard users could only use particular CallCard booths (which were marked with a yellow placard stating "Cardphone - Calls Without Coins"). Likewise, coin phone user's could only use payphones marked with a white placard stating "Coinphone". 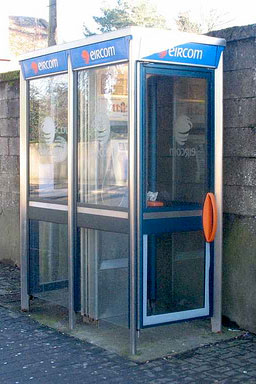 These phonebooths were the final ones to be installed countrywide by Eircom. This rollout was mainly performed after Telecom Eireanns rebranding to Eircom, after being made private.

These phonebooths were called the "New Kiosk" (see the New Kiosk CallCard!) and were mostly all fitted with the newer Eircom coin and card phones. A gradual roll out of these new kiosks took place around 1999 to 2001. Most of the previous kiosks (pictured above) were replaced with this one.

These kiosks boasted "Better lighting and notices", "better views", "shelf for convenience" and "greater visibility for the customer".

I'm not sure if Eircom would be able to help but have you tried www.irishtelephonebox.ie?

Hi Paddy, you can go to Irishtelephonebox.ie if you are interested in purchasing an old telephone box. The website isn't completely finished yet but it is available to browse but you just cant purchase directly from the website just yet. There is twitter and Facebook (irishtelephonebox) under the same name to if you want to contact us and we can get back to you. We also have brochures if you are interested also. Cheers[/quote]
Great idea, best of luck with it lads :)

Also apologies for the poor English in parts. That was a rushed reply :-? I am better then that ;-)

Hi Paddy, you can go to Irishtelephonebox.ie if you are interested in purchasing an old telephone box. The website isn't completely finished yet but it is available to browse but you just cant purchase directly from the website just yet. There is twitter and Facebook (irishtelephonebox) under the same name to if you want to contact us and we can get back to you. We also have brochures if you are interested also. Cheers

There are still a few of the old style phoneboxes out there, Dublin has a few as well as smaller villages around the country. I was actually in Kerry on holidays the last while (am a Dub :) ) and I was surprised to see the older steel style kiosks still in use around many of the villages along the ring of Kerry (didn't get a chance to stop off in them to see if Callcards could still be baught!). This is just one example in Cahersiveen, although most of the ring of Kerry small villages I passed through were never "upgraded" to the New Kiosk.

love the old style phone boxes pity they are gone

I'm not sure tbh. I know that eircom just dismantle the metal ones and sell them off for scrap, not sure if they keep the old style ones intact after removal. Your best bet is to contact Eircom regarding this

:zzzpqu9d Where can I buy an old type phone box ze4a8

:zzzpqu9d Where can I buy an old type phone box ze4a8