Chip cards, or smart cards shared the same form factor as credit cards and other magnetic type phonecards. This made them ideal to use for phonecards, as they were much more convenient than cash which cluttered up wallets. These cards had a microchip installed in a position on the card. Variations have been known to exist, although generally it was positioned centre-left on the card.

Invented by French engineer Roland Moreno in 1976, Telecom Eireann had seen how well the chip cards were working for France Telecom, who introduced smart phonecards in 1984.

Chip cards were also more secure than the magnetic or optical cards commonly in use at the time. While the cards cost more to produce, the fact it was harder to use them fraudulently was a major selling point. Plus they were also very durable, unlike other magnetic type cards where dirt or scratches could potentially render them inoperable.

How write once smart cards work

The chip cards work due to having a EPROM chip glued to the card surface. These chips are programmed in the manufacturers factory with set a amount units agreed on by the provider, in this case Telecom Eireann and Eircom. The amount a chip can hold varies depending on the manufacturer and chipset. to protect the card from being re-programmed after it leaves the factory, a small fuse included in the chip is blown. This makes attempting to re-programme the chip impossible.

Telecom Eireann and Eircom used unit configurations of 5, 10, 20, 50 and 100, except for maintenance cards where 150 unit cards exist. These units could be electronically erased by the cardphone reader, but never replaced.

Telecom Eireann, along with Dublin Bus and others introduced a re-programmable smart card. The idea for this was to be an "electronic purse". The user could use the card to make a bus journey, phone call or pay for a parking space. These cards could be re-programmed outside of a factory using an approved device. 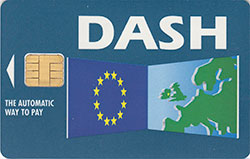 These cards use a EEPROM chip. These chips can hold more data (the DASH card (pictured) could hold 2Kilobytes for example). Credit Cards, SIM Cards, TV Cards, Access cards to name a few use EEPROM chips, a technology that is still very much in use today.

These chips could hold any type of data, including units and whatever security methods necessary to prevent fraudulent use. Newer technology has resulted in chips to be able to hold vastly more amounts of data, than EEPROM chips could 20 years ago.

Continue Reading: About the chipped Callcards