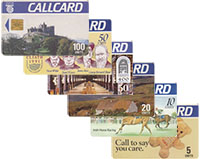 When the three Callcard trials ended, Telecom Eireann chose to use chip based smart cards for their phonecard product instead. The smart card, invented by French engineer Roland Moreno in 1976 was the most secure, and technologically advanced phonecard system in it's day.

Interestingly Ireland was one of the first countries in the world to introduce chipped phonecards, alongside France in 1990, just three years after they began the phonecard trial.

The earliest chipped Callcards Telecom Eireann released were the Teddy Bear, Cottage, EC Presidency '90 and Rock of Cashel. Interestingly a 10 unit Callcard did not arrive until a year later, in 1991.

A special complimentary IMI Callcard was also issued alongside the definitive Callcards to be handed out to delegates at the 1990s IMI "New Ways for the Nineties" conference.

The Cottage Callcard for example had three different chipset manufacturers during it's print run from 1990-1994, and between those manufacturers there were over 60 different variations.

The Cottage design was also used on the test Callcard produced for the train trial of 1994, which used the Solaic chipset. This card was famously known as the “black back cottage”, as the rear colour scheme that was navy/blue on the other earlier Callcards, was completely black for this test card.

The Irish Horse Racing Callcard was Telecom Eireann's first 10 unit chipped card, issued in 1991. Like with the Cottage Callcard, this one was printed during multiple different print runs, by five different manufacturers.

A very interesting mistake made by Schlumberger, a french company incorrectly translated "Irish Horse Racing" to be "Horse Racing in Ireland". A print run of 166, 000 cards saw this mistake card enter the market. As there was a relatively low amount printed with this mistake, finding this card mint and wrapped can be quite difficult. Some collectors believed this card was valuable used due to the interesting flaw, but this was never the case.

Early Callcards included the payphone managers address on the rear of the card, a move to help users contact the manager if they had an issue with their Callcard. A contact number was also included beneath the address. During the early nineties this address frequently changed. These changes were noticeable on cards with multiple print runs. The Cottage Callcard for example had three different addresses included over the four years.

The Payphone managers address (in order of history):

Among the Callcards with large print runs, some other early cards were produced in substantially lower quantities. These include the Rock of Cashel, St. Patricks Day 1991, Limerick Treaty and the GAA Cards (All-Ireland Hurling and All-Ireland Football).

Due to these cards having such low print runs (as low as 12, 000 for the Limerick Treaty) these cards are quite hard to find, especially in good condition or mint.

An interesting point to note the two GAA cards were printed over a glossy surface without any protective layer applied. As a result finding these cards in mint condition, not scratched can be difficult.