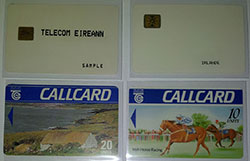 Throughout the years, many different cards were produced for testing, maintenance or demonstration purposes. This applied for both the trial cards as well as chip cards.

During the Telecom Eireann phonecard roll out most manufacturers supplied demonstration cards. These differ from test cards as they were only issued in limited quantity during the introduction of the cardphones, to ensure their chipset would be compatible with the phones hardware.

The Demonstration cards were typically plain, with the country name and Sample text present. "Irelands First Callcard", or Demo 3 was the first chip based Callcard introduced to Ireland. Previous demo cards were configured for a different chipset position, known as "AFNOR". AFNOR was a position found on early French phonecards, superseded by the more modern centre-left position.

Dummy Callcards were produced to test picture print quality, print alignment and also demonstrate designs to Telecom Eireann and Eircom before the card was produced. These cards have no chipset installed, instead showing the full image including area that the chip would hide or else have a section on the card cut out for a chip.

Maintenance Callcards were typically plain, with little or no branding in most cases. These cards were used by payphone engineers to verify that the card reader was working, both to read and also to erase units.

Some maintenance cards had more than the usual unit count, 150 units being common. Many of these cards could not make a call, however, and the units could only be erased manually by pressing a special button inside a cardphone.

The Black Back Cottage (Solaic Chipset): This card was issued for testing the Monetel card phones (that France Telecom had used) that were installed on Iarnrod Eireann trains in 1992 which used the Eircell cellular network for phone calls.

The card differs from other Cottage most noticeably due to the different chipset (Solaic S03) but also the information listed on the back of the card was all in black, compared to Telecom Eireann's typical use of Blue/Navy colours for this information. Another point worth noting is due to a slight shift of image the landscape shows more detail than the other cottage cards.

This trial itself was short lived, and believed not to have been a success. A total of 1, 000 of these cards were produced with 650 made available to the collector’s club after the trial.

The ORGA test was a public test, unlike the other two. The ORGA card had two print runs with some minordifferences. The differences are:

While these cards were sold through the usual retail outlets, they were only ever part of a trial, and the ORGA chip was never used on any other Callcard. There were two ORGA demonstration cards issued alongside the test cards.

To identify the ORGA card differences see the reference below: