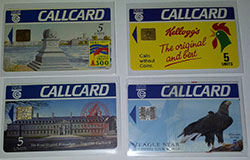 As with other countries worldwide, the idea of using telephone cards to promote important events, release special limited edition cards as well as use phonecards for advertising started from 1991 onwards. Telecom Eireann saw this as a way to entice collectors with a greater variety of cards, but also make some money from advertisers interesting in promoting their products and services on a Callcard.

The first advertising Callcard was by Kellogg's Corn Flakes in 1991. This card contained a bright and colourful design, using the official Kellogg's cockerel mascot as part of the design.

Later advertising Callcards were also sold through retail channels, typically using 10 and 20unit denominations as these offered the greatest reach to customers.

In the early nineties Callcard collecting took off. Many collectors were eager to get their hands on Callcards and many Callcard sales were cards for collections, and were never used. Telecom Eireann realized that to please collectors limited edition rare cards must be made. The first "limited edition" Callcard especially targetting the collector market was the “Royal Hospital Kilmainham Collectibles Fair” card which was issued in 1993 with only 1, 100 made.

There were also rare cards issued previously by Telecom Eireann, including the Shamrock and Limerick Treaty, however these were issued to mark events and to promote Callcards, not with collectors in mind.