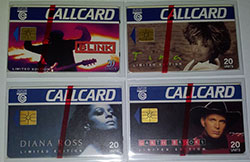 EMI Music teamed up with Telecom Eireann to bring out a music promoting Callcard for the Irish band “Blink”. Further cards for Tina Turner, Gareth Brooks and Diana Ross were also produced.

Cards for George Michael, Bon Jovi and Tina Turner were produced later on.