Behind the scenes of the public Callcard rollout 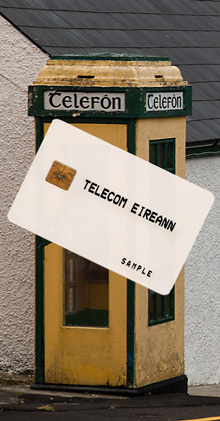 Subsequent test cards were issued by ORGA, McCorquodale and Intel. Of the three only the ORGA chipset saw a limited public test release – The Irish Horse Racing card.

In 1994, Telecom eireann partnered with Iarnród Éireann installing cardphones on certain trains throughout Ireland. A limited public trial of the service was conducted, however due to technical problems the project was abandoned.

A test card was produced featuring the Cottage design and using the Solaic SO1 chipset. Only 1, 000 of these test cards were produced and only 350 were used during the trial period. The remaining 650 cards were sold via the collectors club.

This test card was unusual, as the rear was printed in black instead of the blue/navy Telecom Eireann always used. This earned the card the title “Black-Backed Cottage”.

Differing to Test cards Service cards were used by cardphone engineers to ensure the phones were able to read and erase units on the phonecards. Like with Test cards many service cards contained very minimal designs, most completely blank.

Interestingly many test cards issued to engineers could not be used to make calls. Instead the engineer had to open the phone and press an internal button to erase a unit.

If you worked for the Telecom eireann or Eircom payphone department or as a contractor we’d love to hear from you!

Do you have any Telecom eireann or Eircom test cards? While IrishCallcards.net has scans of many of the test cards we are always looking for more.

Please get in touch with Contact today if you would like to contribute any scans, callcards or information! 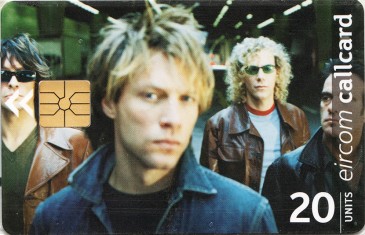 This Callcard was issued to promote singer Jon Bon Jovi's 25th of August concert in the RDS,[...]