A History of Cardphones used in Ireland 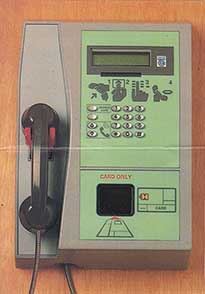 The Schlumberger Access 110 with a green colour scheme as used in Ireland.

The Access 110 was the earliest cardphone for chip based Callcards Telecom Eireann introduced. The phone itself was produced by Schlumberger, the French company who also produced the chips used on many Callcards, including the first one IMI New ways the Nineties. The Access 110 was a versatile card phone, which was also used regularly by other major Telecommunication companies worldwide, including France Telecom.

This cardphone was typically installed in Telecom Eireann phonebox kiosks, and also was found in many public locations such as train stations, shopping centres, airports etc. It was capable of reading and erasing all of Telecom Eireanns Callcards that were issued with a chipset. It would not read any of the earlier Trial Callcards, which would have used a different cardphone to operate.

The Access 110 cardphone would only accept phonecards to operate. This meant if the user wished to use coins that they would need to use a separate coinphone kiosk. Telecom Eireann typically provided two phone kiosks together with both a coinphone once side and then a cardphone the other side. This was not always the case however, and it was possible to find different combinations depending on the location.

To the right is a photo of a Access 110 cardphone with a green colour facia, the type that was mostly found in Ireland. Interestingly this photo is actually taken from a Complimentary Callcards welcome pack. This welcome pack was included with the Teddy Bear, St Patrick's Day 91 and also Treaty of Limerick Callcards. 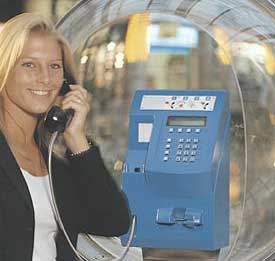 A picture of a L&G Comet cardphone in use. Credit: Source

The Comet cardphones were more advanced than the Access 110 model as they also supported credit card payment as a method for calling. The user could insert a credit card and the cardphone would allow them to debit the credit card for the duration of the call.

Interestingly there was never a outdoor roll out of the L&G Comet cardphones, so while a shopping centre may have had one indoors the cardphone kiosk outdoors likely had the Access 110. A possible reason for this could be that the payphones themselves were more delicate and may have been easier to vandalise if installed outdoors. 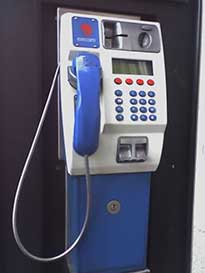 A picture of the IPM Group Trilogy payphone without external coin feeder. Credit: Gary A. K./Flickr

The IPM Group "Trilogy" Coin and Cardphone, still in use today was rolled out countrywide in the late nineties. The launch of the Trilogy payphone coensided with the rebranding of Telecom Eireann to Eircom. The IPM Group acquired the Landis and Gyr Communications division in 2001, however these payphones would have been Landis and Gyr branded during the Eircom roll out. Most of the Schlumberger Access 110 and also the L&G Comet payphones were all replaced by this model in the early '00s.

The Trilogy payphone was a dual purpose hybrid device which supports payment via both Coin and Callcard. At a time when mobile phone use was kicking off and Callcard sales declining the introduction of a dual purpose phone was a welcome idea. Users would no longer need to carry a Callcard around with them anymore as all payphones would accept either payment method.

The Trilogy payphone launched also in tandum with the New Kiosk, a more modern, spacious and bright phonebox. The New Kiosk Callcard was released just before the Eircom re-branding in 1998, to advertise the new phonebox.

Interesting fact: Coins jamming inside the Trilogy payphones was very common in the beginning. These days most if not all of the phones have had an external coin dispenser fitted, to avoid the payphone jamming.

The Eircom Smartphone was released in the year 2000, introducing the ability for customers to access dial up Internet services through the phone. The Eircom Smartphone supported all payment methods as the previous so users could use Callcards, Credit Cards or even Coins to operate the device.

With the internet craze hitting Ireland fairly rapidly in the early 2000's and many members of the public having access to email addresses the Smartphones allowed users to check their email on the go, check up on the latest news or sports results or even check train or flight times online. The device was touch operated and had a full QWERTY keyboard for data entry.

The Smartphone roll out was fairly low, with devices mainly being installed in large foot traffic areas (such as airports, train stations and certain phone kiosks in Dublin City centre), usually complimented with standard payphones alongside. At launch the device was plagued with stability and reliability problems. Also due to the high operation cost of Internet use on the device popularity was low.